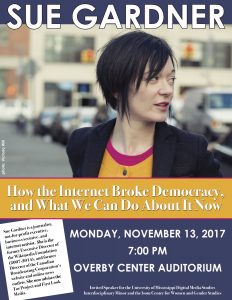 “How the Internet Broke Democracy, and What We Can Do About It Now” was the provocative title of a public lecture featuring journalist Sue Gardner on Nov. 13, 2017.  Digital Media Studies and the Sarah Isom Center for Women and Gender Studies co-hosted the event which was open to the public.  In her talk, Gardner focused on how social media and the internet have shaped our current political climate and particularly on how they influenced voting behaviors in the 2016 presidential election.  Gardner takes a dim view of such practices as social media’s propensity for micro-targeting, noting that “these trends spray a miasma of confusion and they stir up conversation in various ways.”

Despite the damage that Gardner believes social media has caused to democracy, she is confident that some practices, such as media literacy education and paying for news, can reverse the negative trends. Gardner was the director of the Wikimedia Foundation from 2007 to 2014 and is a former director of the Canadian Broadcasting Corporation’s website and online news.

Robert Cummings, executive director of academic innovation and associate professor of writing and rhetoric, invited Gardner because of her expertise on the role of technology in our culture.  “I think that she is an important person to speak to students at the University of Mississippi because she can provide insights on how the worlds of technology and social media have affected the health of our democracy,” he said. “In addition, at times we can be very removed from the realities of the manufacturing of social media, and I think that she can bring insight to our students about those communities.”